We had an awesome day today. Even though it was freezing and grey outside.  We had a movie day, and just cuddled on the couch, and it was great! I love when he just wants to be lazy too. I haven't been feeling well the past few days. My lymph node is still super swollen, and the last round of antibiotics and steroids didn't help. All they did was make me sick to my stomach. I had a follow up appointment on November 29th, but I cancelled it. The next step in figuring out whats wrong is pretty invasive, so I decided that I want to wait until after the holidays. While it may not be the medically recommended decision, it's my choice. I do not want to spend the next month waiting on test results, and taking meds that make me sick. Not my idea of a fun Christmas.

I dug the tree out of the garage this past weekend, and tonight's the night that I am going to put it up. I am going to wait for Jp to go to bed, and then start the adventure. I want to get at least one picture of all the ornaments on it, before he starts tearing them off. I have a feeling, "No, don't touch that" is going to be said millions of times before Christmas is over. Good thing I bought shatter proof ornaments!! I did get the stocking put up this weekend though!! I just love Jp's little reindeer stocking. 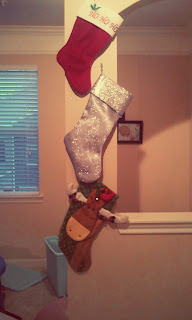 Time to get dinner started for the guys!! Hope everyone had a great Tuesday!!

XoXo
-Courtney
Posted by Courtney W. at 11:46 PM No comments:

Well it was a LONG Movember, but we are done with this great month. My husband grows quite a stache in a month, so here it is!! 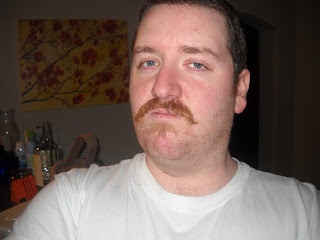 This picture makes me laugh uncontrollably for some reason. I love this guy. Unfortunately we are not off to the smooth face just yet, he is growing out the beard again for a movie that he and his friends are making. We have an annual party every year called Monkey Christmas, which always includes an AWESOME comedy video. Our very talented friends Andy, Tim, and Don, write and shoot these shorts, and this is the first year that my hubby will be in one! I can't wait to see it, and I will be posting a link to the video when it's available. In the mean time check out some of the past years at Monkeyxmas.com.
Any hoot, it's time to take the little man outside. We are going to run off some of this energy in hopes that he will crash out early tonight!!
XoXo
-Courtney
Posted by Courtney W. at 2:09 PM No comments:

Thanksgiving 2011 is in the books!

What an awesome Thanksgiving we had! My mom drove in from San Antonio to eat with us, and we had a TON of food! 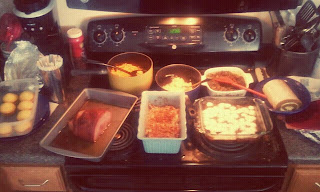 I'm still stuffed!! The $0.28 Ham was a hit, and it turned out fantastic. I added some brown sugar, cracked pepper, and salt to it. Yum! Saturday night we also had our annual "Friends Thanksgiving", at our pals Kyle and Ashley's. I actually bought a second ham the day I found ours, so we took it on over. We also made an amazing creation. Candied yams with the traditional marshmallow topping, but we added a little something extra. BACON!! Yes! It was a total success, and John and Kyle were scraping the mallows and bacon off of the top and just eating that!! We have decided that in the near future we will be doing a iron chef style potluck, secret ingredient.....bacon!!

I have to admit, I put my balcony Christmas lights up a tad early this year. Like as soon as it got dark on Thanksgiving night. I'm totally ready for Christmas. I am scared that Jp will attack the tree though. In fact I KNOW he will! He is a tiny mad man at times, and I know the ornaments will insight some sort of rage in him. He has my strong sense of determination, and when he sees something he wants, he goes for it with reckless abandon. It will be a miracle if we make it through the season without our tree crashing to the ground. But I guess that's all in the fun of being a parent, and it will definitely make for a great photo op! We are going to tackle putting up the tree today, but I will be gradually decorating it, in hopes that I can keep a few ornaments out of little mans hands!

I LOVE Christmas, and I can't wait to get the house all decorated and smelling like pine trees!

XoXo
-Courtney
Posted by Courtney W. at 10:00 AM No comments: